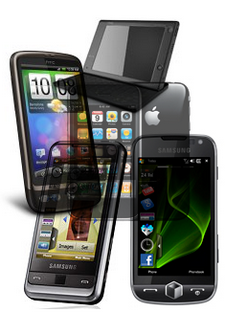 I havent updated my page on Phones here for sometime – for one thing the market innovation has just raced at such a speed it is almost impossible to keep up!

There can be no doubt that small handheld devices, more powerful than todays laptops will become commonplace – connected to huge datacentres like Amazon Cloud Front, Google, or Microsoft Azure and across the web for the provision all sorts of services from weather to location to social networks.

By the way this does raise all sorts of global warming issues that Greenpeace and others have highlighted. These mega datacentres use enormous amounts of power for chilling as well as for running the equipment. Google for one has begun a “follow the moon” strategy so that loads can be swtiched to centres across that world that will have cheaper power at night and also climates where chilling is less important.

Anyway, back to phones, the question is simply – if I was to buy a phone today in order to run some of the nav software available for boats – which one would I choose? hmmm….tricky, everyone hates to buy something that is out of date by the time it is delivered !

I have prepared a spreadsheet with the phone models that I am considering and of course the choice between Android v Apple OS v Windows Mobile 6.5 is absolutely fundamantal to the choice of phone. Then there is Windows 7 for mobile…..

One big issue so far for iPhone is that its operating system did not do proper multi-tasking. In other words it would not allow more than one application to share the memory space available in the phone and operate together. This is pretty important if you are running nav software!.

Apple have launched OS-4 which does do multi-tasking BUT it will create priorities for applications based on the Apple iStore classification that might not allow an application as much processing power as you’d like it to have.

I would refer you to these interesting posts on the subject:

But, in the meantime I have summarised my phone comparison so far… To download a PDF of my spreadsheet just click here…this is a work in progress 🙂

I would be interested in comments from developers as well as sailors on this subject.

3 thoughts on “Which smartphone for your nav software?”