When you look at the recent product launches of companies such as Navico, Flir, Garmin, Furuno and Signet SA Group, its fun to try and pick out their strategic intentions. Keep in mind that Flir own Raymarine, and Furuno Electric Company is a significant shareholder of Signet S.A. who in turn own MaxSea, Nobeltec, and Mapmedia. Navico own the B&G, Eagle, Northstar, Lowrance, and Simrad brands! Jeppesen is a subsidiary of Boeing Commercial Aviation Services and sold Nobeltec to Signet a couple of years ago and appears now to concentrate on its C-Map chart development

We appear to be edging ever closer towards a complete glass bridge system – even on sailing boats. This concept not only means that instruments can be portrayed in a myriad of forms; combined with each other in a myriad of ways; but they can be displayed on any device that will accept the NMEA2000 protocol and run the appropriate software – so that means flat panel displays; handheld devices like iPads; smartphone like iPhone or Android based phones – and who knows what next – all sharing data in real time!

The glass bridge concept also allows the integration of disparate systems such as navigation instruments and data; fishfinding data; other instrumentation such as engine data; multimedia entertainment; and onboard cameras and even internet browsing/email and so on.

One essential prerequisite for the concept to work is fast data networking, and so the marine industry has, as you know, started to implement the Ethernet standard for networking and leave the old NMEA0183 behind. Well, as you probably also know, the certain marine suppliers have been up to their old tricks and have decided to implement non standard versions of NMEA2000 – sigh.

Lets pretend for a moment that NMEA2000 is implemented well. Then being able to share data between devices like iPhones and Chart Plotters and engine monitors should be as easy as plugging in a cable and installing the appropriate device driver – as you would on your laptop with a USB device – and we all know that that always works too! 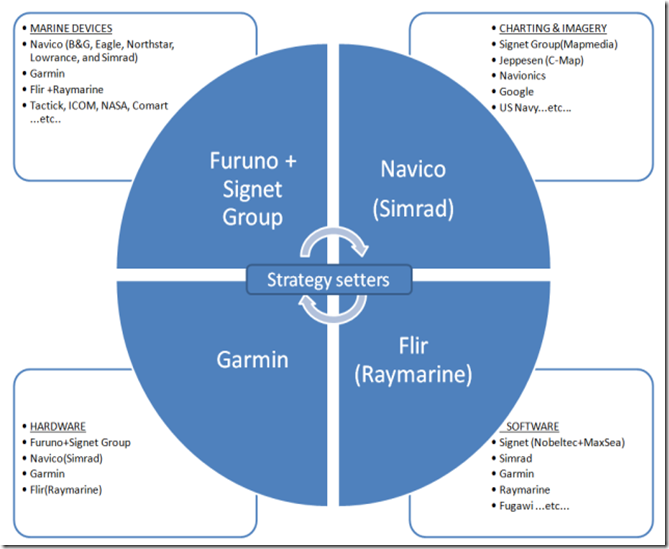 So what we have here is a wonderful concept – but, the suppliers are all determined to provide their own fully integrated portfolios of hardware, cabling/connectors, interfaces, and software so that there is as little chance of interoperability as possible.

I don’t hold out much hope that the marine industry will ever agree on, and maintain standards – why should they? That would only reduce their market share and increase competition.

This was exactly the position in the PC market place in the 80’s,  before Microsoft really started to wield monopoly power and, as an unintended consequence of their actions, brought some degree of standardisation to the PC industry – I said “some”

I thought I would try and represent the supply chain and the real companies behind the product developments that we are seeing:

As you can see and IMHO, there are relatively few companies that really control the trends and the innovation in the marine electronics market place. The multiplicity of brands will continue simply to give the poor boater the feeling that there is real choice.

The recent announcement that Nobeltec’s Trident software is based on TimeZero technology – the same technology that is the foundation of MaxSea software – shows how their holding company can squeeze as much competitive advantage as they  can from their innovation. Who can blame them for that.