For some time Fugawi has produced a perfectly good piece of navigation software Fugawi ENC. I must confess I have not had time to review it in detail, so much time was spent with my 7 part optimal routing series last year and with testing MaxSea TZ in action.

Who owns Fugawi? – well in January, software manufacturer Northport Systems that owns Fugawi and X-Traverse.com (the online chart subscription service) announced that its president, Robin Martel, had acquired the company. Robin Martel took over as the owner of Northport after having joined business development manager in 2002. He became the company's president three years later. Prior to joining Northport Systems, Martel co-founded and led New Zealand-based GPS Control Ltd., working as its managing director and technical manager; held directorial positions with Pico Data Ltd. and Expressway Group Ltd.; and was the marketing manager, sales engineer and IT manager for Geo-Systems Ltd.

Northport Systems began operations fifteen years ago. Its first product was the affordable Fugawi-brand mapping software for GPS receivers, which allowed customers to scan and calibrate their own map images for use with early GPS handheld devices. The company has since expanded both its customer and product base, and now offers a selection of GPS-related software products for land, marine, commercial and military applications; as well as an extensive line of digital maps and charts for regions throughout the world that are available for instant download from X-Traverse.com to a wide variety of PC, Mac, iPhone, Android, Symbian and Windows Mobile devices. With its desktop, mobile and web-based navigation and mapping software products and services, available under the Fugawi, X-Traverse and third party brands in over 130 countries, Northport Systems enjoys a worldwide reputation as a leader in GPS mapping software and innovative GPS applications. 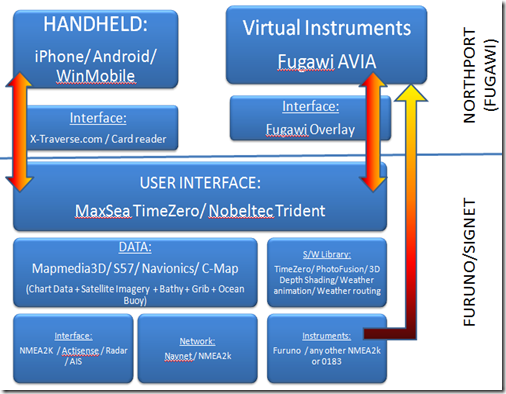 Handheld/Mobile Device Expertise – So Northport/Fugawi has a great track record in getting digital charts and charting software on to a very large variety of GPS enabled handheld devices and smartphones. Its X-Traverse.com is a web service that allows you to transfer your digital map data and personal Waypoint, Routes, Tracks and POI to and from your PC, iPhone, and other mobile devices.

Northport/Fugawi have already proved their skill with the excellent $129 NavPlanner2 which is bundled with Navionics Gold charts of the entire U.S. plus the Northern Bahamas, and a Navionics card reader.  The software also has GRIB weather file overlay facilities and it includes even more U.S. freshwater data than HotMaps (17,000 U.S. lakes on a $20 DVD!), with all of Navionics High Definition lake surveys. This is a great planning tool from which you can transfer routes to most your plotter using cable, card, or Internet.  NavPlanner2 supports Waypoint, Route and Track transfer export to: GPX, Google Earth (KML or KMZ), ESRI ShapeFile, Fugawi or ASCII Text.

It is also compatible with MuskokaTech's PathAway GPS Software for Windows® Mobile and Nokia/Symbian operating systems. It can be used with Fugawi's X-Traverse to transfer data online with iNavX or iMap on an iPhone or iPad, Facebook, and more. All the transfers are two way so you can use NavPlanner2 to collect and enjoy tracks you made on all sorts of devices.

Strategy – So following the thread I began about strategic trends in marine electronics and the posting about the structure of modern chart plotting software which looked at the products coming from the Furuno/Signet stable (MaxSea TZ and Nobeltec Trident) – its seems perfectly sensible that Robin Martel should be talking to these guys about joining forces.

Now please note I have no idea if Robin is doing this – BUT I would be delighted if Northport would bring their the undoubted expertise in the mobile arena, and the brilliant glass bridge AVIA series of products, into the fold.

The North Vancouver based Avia Design Group Inc. is the producer of the Avia Sail and Avia Motor line of virtual instrumentation products for NMEA 0183 and NMEA 2000® networks. And Northport appear to have an exclusive distribution agreement for this product line.

Of course as the diagram illustrates there is nothing to stop you doing this right now. All the elements of the software and hardware interfaces are on the market right now and all will work together using the important glue of X-Traverse.com at the software/data level, and Actisense at the hardware level.

In the meantime Garmin, who is pretty much a go it alone type of company building their whole stack of products from the hardware upwards, is going to have their work cut out. As for poor old Raymarine – well readers of my previous postings know what I think of their strategic thinking! – as I have said before, good luck FLIR !

In my next post I will look at the Fugawi AVIA product line – very exciting, and its not just a pretty face!

1 thought on “Fugawi breaks away from the crowd…”