I don’t know if you have come across this battery or the claims being made by Lifeline, the manufacturers. 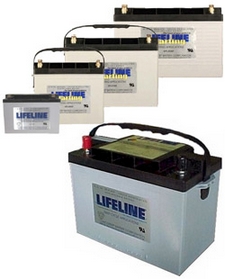 more suited to solar panel charging systems…was the safety aspect – “No Venting”. When batteries are mounted for bow thrusters or an anchor windlass they are often sited under the bed or at least somewhere within the fore cabin. So any improvement in safety here would be of interest.

With this Lifeline system you could have the two battery banks and then a VSR (Voltage Sensitive Relay) that’s all. The system would work in exactly the same way and would also charge as quickly. While the initial battery cost is higher than conventional batteries, the expensive split charger and alternator controller isn’t needed. What’s more, the system would be easier, and less expensive overall, to install.

instantly preventing the surge from motors, power tools etc tripping out the

installations of their products.

above) making Lifeline entirely appropriate for this application. However, how long

does a bow thruster run for? Typically, 3 minutes maximum. Say the thruster was

rated at 4kW at 12V (which equates to around 333 amps); Remember though that

To download my free Excel spreadsheet showing how to assess your power usage while at marina, anchor, or sailing please click here