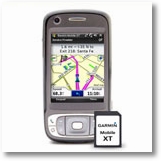 I wrote about Mobile XT previously. My comment was not that you couldn’t get chartplotting software on a smartphone, because patently you can – the comment I made was that you couldn’t get Bluechart marine charts to be read by Garmin Mobile XT on a smartphone. After making that post Bob left a comment that he had managed to get his Garmin Mobile XT to read Bluechart charts on his phone – even though this feature was not documented!…

Just to recap,Mobile XT is Garmin’s new GPS app that will be used in the expected Mobile 10/GPS 10X and Mobile 20/GPS 20SM products.

Garmin will also be releasing Mobile XT as an update for the ageing “Que” Pocket PC software that is included with the GPS 10 Bluetooth Receiver package.

Mobile XT is a newer version of the “Que Nav” application that comes with the iQue M3 and iQue M4 Pocket PC devices.

The software is sold on microSD cards that you insert into a smartphone which has built in GPS – you can of course use a miniSD or standardSD converter to house the card if necessary, for example in a PDA.

If your smartphone also has GPRS (data service) then the software will access “Garmin Online”. This gives access to a wide range of services such as traffic, weather, hotel rates and more. It give real-time traffic information from traffic.com about traffic tie-ups and road construction that lie ahead on your route. Hotel rates, ratings and availability information comes from hotels.com. There is a good article here about the use of XT on a smartphone

So all the elements are there for using your smartphone as a handheld marine chart plotter on board your boat, and saving yourself £200 to £300 for a dedicated marine plotter.

… I haven’t tested this theory, but now I am sorely tempted, having just changed phone to the Samsung i780 that has built in GPS…but then there is Active Captain too …