I use a Raymarine C120, it can display tidal flow and even “animate” the flow over time, it is fully interfaced to my instruments for wind, and speed – but alas what it doesn’t do is:

a. Tell me precisely what time it is using – yes I know I should know – but why can’t it tell me it is set to UTC or GMT or BST or whatever at the point when I need it i.e. when I am calculating a route! This is critical to working out the time of HW at your reference port of departure, and then the tidal flow for each hour of the passage.

b. The tidal flow is not connected to any sort of calculation of course to steer – so you have to leave your 3,000 dollar technology and get your pencil and notepad out to calculate CTS. 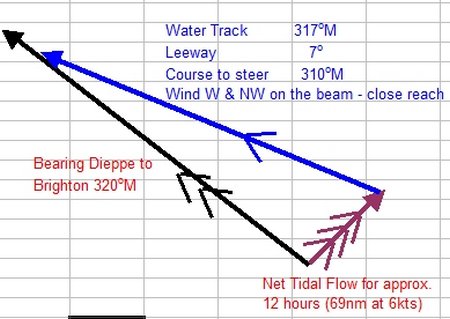 On a recent trip from Dieppe to Brighton, this is a representation of the scribble I had to do to calculate CTS. This is after adding all the tides West and then East along the English Channel for the exact time of day and the duration in hours of the planned passage. Since the passage is at least 12 hours for a normal yacht averaging 5/6kts there will be two tides almost cancelling each other out at this part of the Channel. According to my calculations the net effect was in fact an easterly tide of about 1.5Kts.

There was – luckily – a steady W wind leaving me to hold a close reach all the way (except when avoiding cargo vessel in the Traffic Separation Zone!). But this increased leeway on my rather heavily built 32ft sloop so I used 7 degrees leeway in my calculations.

Giving a final Course to Steer of 310 degrees M.

The other issues is that since the predicted track is not displayed on the C120 screen, you don’t get an easy time estimating whether there are any 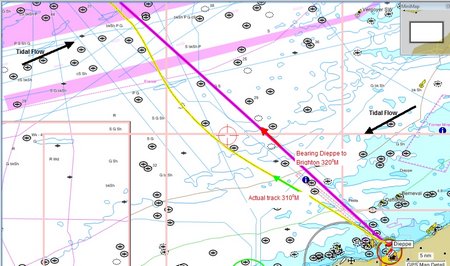 dangers to avoid if you stick with your course to steer. Crossing the English Channel that is not normally such a problem – but there could easily be an island, a rock, an oil rig or even a wind farm in the way…

Naturally the CTS of 310 degrees M that I steered gave me the banana shape course over the ground rather than the red line that the C120 shows as the course between the beginning and end of this journey. (Click on the adjoining screen shot for a larger image.)

So, a plea to Raymarine – please update the C and E series software to do what programs such as Neptune and SeaPro can do !

That would be far more useful than an aerial photo of Dieppe!

3 thoughts on “Your chartplotter doesn’t know Course to Steer”