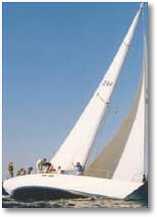 On 26 December the 2009 Rolex Sydney Hobart Yacht Race race will begin. Over the past 64 years, the Rolex Sydney Hobart has become an icon of yacht racing. The 628 nautical mile course is often described as the most gruelling long ocean race in the world. But the nice thing is that it attracts professionals and amateurs alike. Some entrants are as big as 100′ this year but also some as small as 30′.

A few years back I was so impressed by the S&S classic yacht Love & War when it won the Sydney Hobart race – for the third time! Of course this shouldn’t happen – the gruelling race favours the 100 footers – five of them have entered this year. They are remarkable yachts in themsleves and I would love to be on one of them – but how much more thrilling to be on the 37′ classic S&S launched in 1973, pictured here.

This classic timber sloop is one of the oldest boats in the fleet. She is a two-time overall (1974 and 1978) and multiple divisional winner, including top placing in the 20 Year Veteran Division of the 1994 50th anniversary race. Peter Kurts, one of the oldest skippers at 79, and son Simon will campaign the magnificent Love and War.

Of course the Bass Strait can be a major challenge and invariably the yachts beat into winds of 30 knots and more for 56 hours.

Here is the race report from the famous 1998 race one of the toughest of all time.

…”1998 Race and Weather: Tragedy struck the 1998 Telstra Sydney Hobart when the worst storm in the 54 year history of the race hit the fleet as most of the 115 yachts entered, or were already in Bass Strait, after a record-breaking dash south down the Australian East Coast.

The race began on December 26, 1999 with a favourable current running south at 4 knots, with strengthening north to north-easterly winds of generally 25-35 knots prevailing off the NSW southern coast. By early morning on December 27, an upper air jet stream and a substantial cold air mass had moved rapidly northwards over Victoria producing unseasonable snow falls on the Australian Alps in the wake of the surface cold front. In association with injection of a deep layer of cold air over Victoria, a new small-scale low begun to form and intensify over Bass Strait to the south of Wilsons Promontory. The central pressures in the rapidly intensifying low dropped rapidly to near 980 hPa. The low initially moved northeastwards but shifted to a more easterly path at a speed of 25 knots by late morning on December 27. At midday, the low passed to the south of Gabo Island, maintaining its intensity. In association with the low pressure system, west to south west winds with mean speeds reaching storm force developed and extended over eastern Bass Strait and southern NSW coastal waters, maintaining much of its intensity for 36 hours. At least 12 competing yachts reported west and south-westerly winds of up to 80 knots and seas of 15 metres, frequently to 20 metres and more, as this so-called “Bass Strait Bomb” exploded. A third of the fleet reported the average wind speed as greater than 60 knots. As one crewmember described conditions, “the sea was sheet white from the wind with white-outs coming through the gusts.” Several yachts reported being rolled 180 degrees and more. Several were rolled more than once. Of the 115 boats which started, 71 retired, 44 finishing after battling across Bass Strait under storm tri-sails and storm jibs, sometimes down to a storm jib or even bare poles. In a remarkable search and rescue operation, 56 crew members were rescued by helicopters and surface vessels from nine stricken yachts or their liferafts, with one man-overboard (MOB) situation. In total 16 yachts asked for some form of assistance. Seven boats were abandoned and five sank during the storm, most of them after having been rolled by the huge seas, as were most of the other yachts in difficulty.

Sadly, six crew members perished at sea in the worst tragedy in the long history of the Sydney Hobart. In Hobart, those who finished the race, along with many who had been rescued and race officials, stood beside Constitution Dock for an emotional “Yachties Farewell” to those who perished at sea in the 1998 Sydney to Hobart Race: Glyn Charles (Sword of Orion), Bruce Guy and Phil Skeggs (Business Post Naiad), Jim Lawler, Mike Bannister and John Dean (Winston Churchill)…”

Follow the race using the yacht tracker here. You have untill November 14 to enter 🙂