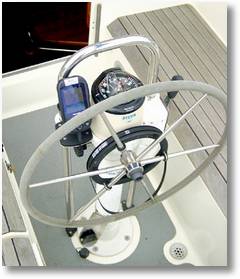 a) take less room than any of the smallest C series Raymarine displays
b) Cost a quarter of the price
c) Use Navionics GOLD charts – the same as the C120 chartplotter at the nav table
d) be able to receive and transmit waypoints and tracks using NMEA (or so I hoped)
e) Not be so large or bright that it would interfere with night vision
f) could run off the ships power circuit – saving batteries and the ‘crash’ events that happen when the battery power runs low…(another post later on that one!) 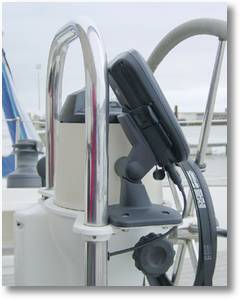 As it turned out all the above criteria were satisfied except (d). The unit can xmit/rcv NMEA but I have not been able to use that facility since the C120 has only one NMEA port and that is set to 38,400bd so it can receive the AIS data – which only comes at that speed.

I havent been able to work round this yet but I am hopeful that somehow I can use the Brookhouse Mux to recv NMEA waypoint/track data from the C120 at 38,400 and xmit it at 4,800bd – I havent got round to this yet – I am just enjoying the fact that the RC400 works – works off ships power – and fits in really well at the helm without getting in my way.