At last Raymarine have produced an AIS receiver – not only that but it combines three other cost saving attributes : 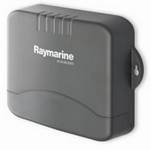 1. It has a built in multiplexor with 2 inputs and 2 outputs which can all be set to different speeds. Remember the C and E series Raymarine chart plotters only have one NMEA port and that can only be set to one speed. If you dedicate this port to AIS then you have to set it to 38,400bd and if it is dedicated to your normal NMEA instruments it would be set to 4,800bd. This new unit from Raymarine would avoid that choice having to be made and would make the Brookhouse multiplexor that I installed last year redundant since that was primarily used to enable me to run NMEA0183 at 4,800 baud (normal instruments) and at 38,400 baud (AIS signal). Of course the Brookhouse also gives me USB connection for a PC so that is a bonus that the Raymarine AIS does not offer – yet. Cost saving for a UK install – approximately £200. On the otherhand I have greater resilience by using a seperate multiplexor.

2. It has an antenna splitter. This means that you dont need a completely new antenna, antenna mounting, and cable run just to install an AIS. Your main VHF aerial can now be used for AIS, FM, and VHF – Cost saving for a UK install – I would say about £250. Again, I would counsel against using splitters, and going for the greater resilience of a separate VHF aerial for the AIS

Only gripe – no status lights ! – why dont they learn !