During his Fall COMDEX 2002 keynote address, Microsoft Chairman and Chief Software Architect Bill Gates briefly unveiled the company’s Smart Personal Object Technology (SPOT) initiative, in which everyday devices such as alarm clocks, wristwatches, key chains, and even refrigerator magnets are made more intelligent through a new hardware and software platform that is small enough to scale down to the sizes required by such devices…it never caught on… and SPOT bit the dust in 2010. Since 2002, we have seen the records in small smart devices set by Apple – first with iPods then iPhones then iPads….but whatever happened to the humble wristwatch?

Recently WIMM Labs launched WIMM Wearable Platform – again aimed at very small devices – but they too seem to have gone quiet – their web site says “During the summer of 2012, WIMM Labs entered into an exclusive, confidential relationship for our technology and ceased sales of the Developer Preview Kit….”.

I though the smart wristwatch device would be made redundant by better and better smartphones – how many young people today even wear a watch? 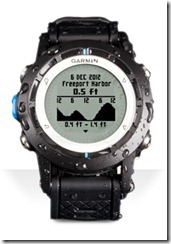 Now along comes Garmin with the quatixtm.

It looks like Garmin are using their ANT technology to connect up this watch with other Garmin nav equipment – this is low power RF technology. The ANT protocol is designed and marketed by Dynastream Innovations Inc. a wholly owned subsidiary of  Garmin.

The quatixtm is a high-sensitivity GPS navigator marine watch.

It’s the only GPS-enabled device that provides an incredible range of marine navigation features including automatic MOB detection, remote control of Garmin equipment, and streaming NMEA 2000® data to a navigating marine watch.

Plus, it shares data wirelessly with other compatible Garmin apps.