In what looks like an industry first, Digital Yacht have taken to the crowd funding platform, Kickstarter, to introduce a new interfacing technology for the marine electronics market.
NMEA iconnectivity has been with us for the past 30 odd years and while reliable, well proven and ubiquitous, it struggles to adequately support smart devices and smart data and in particular the next generation of the internet of things afloat. There are also some legal issues in that products and apps must be certified which is costly and stifles the smaller application developers.

However, things are changing with the introduction of a new open source platform called Signal K which has been quietly developing over the past few years and is now ready for mainstream adoption.

You can find out more at www.signalk.org 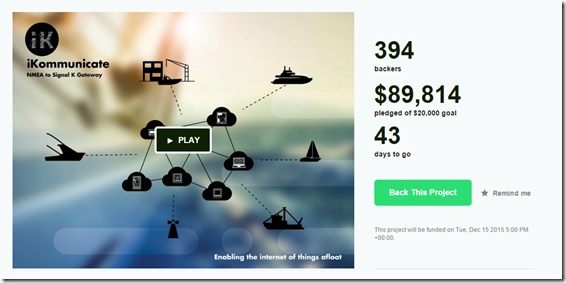 Signal K aims to be the next generation solution for marine data exchange. It is intended to be used not only for communication between instruments and sensors on board a single vessel, but also to allow for sharing of data between multiple boats, aids to navigation, ports, marinas or any marine asset. It is designed to be easily implemented by web and mobile applications and to connect boats and ships to the Internet of Things Afloat.

Interestingly, at this year’s NMEA Conference, the Signal K presentations were the most attended of any and all the leading manufacturers have woken up to the potential.

Digital Yacht have designed a gateway called iKommunicate that links NMEA 0183 and NMEA 2000 based systems to the new Signal K format allowing existing marine electronics to integrate with the new standard. But like any emerging technology, a catalyst is needed to seed change so they’ve embarked on a Kickstarter campaign to gather early adopters and bring the product to market.

"Kickstarter isn’t just about the funding element of a new product but also about the valuable direct relationship we can establish with early adopters who can provide so much information for applications. We see the co-existence of NMEA and Signal K being the perfect technology match and iKommunicate acts as an easy to install gateway" commented Nick Heyes, CEO of Digital Yacht.

The project is live now and will run until mid December.

You can find out more at:
https://www.kickstarter.com/projects/1689846268/ikommunicate-gateway-enabling-the-internet-of-thin