What have these two companies got to do with each other …you may ask!

Well, my buddy the “oil baron” took me out on his brand new Sealine F42 recently. The F42 is a fantastic motor boat, but of course one of the issues of owning such a boat – even if you are an “oil baron” – is that you want to be able to gauge the fuel consumption as you speed along at 20+ knots…

The F42 has a planing hull, and 2x Volvo Penta Diesel IPS500 370hp (or 435hp) engines…. you really would want to know the optimum speed (for the sea conditions) and also the trim tab setting for the sea conditions and the speed that you are doing. If only you had some sort of dial that would show you the impact on fuel consumption, as you adjusted the trim tabs up/down or, as you powered down or up on the throttles.

Well – as you may suspect – the F42 comes with a system to do just that. It’s the Volvo EVC system. This is composed of the panel shown here plus the engine control throttles and associated switches. There is a very good video showing the Volvo EVC system being used at BoatTest.com. What struck me – and the oil baron – as strange was that there was only one fuel consumption gauge even though there were two IPS engines. This may be because the software in the EVC system is so clever that it automatically adjusts the fuel efficiency of both engines such that a combined reading is the only sensible one to show (?) – I don’t know – more digging around required!

In fact the Volvo EVC system even has a cruise control and auto trim assist button the former automatically keeps the speed you set, the latter adjusts the trim for optimum fuel efficiency – job done!

The Murphy HelmView is a plug-and-play system that works with J1939 and NMEA 2000 protocols to allow the sharing of information between onboard electronic devices. There are three CAN (Control Area Network) inputs that can integrate engines, gensets, NMEA devices, and GPS. On a display at the helm, you can view everything from speed, engine rpm, and fuel burn to waste-tank level and rudder angle. You can even view trim tab levels.

The 6.4-inch colour VGA LCD flat-screen display can also act as a backup chart plotter since it is compatible with Navionics chart displays – the same one that you would use in your Raymarine chart plotter. Murphy have been in partnership with a number of companies to supply their engine and engine-driven controls and monitoring systems e.g. Nautique LINC digital display system. 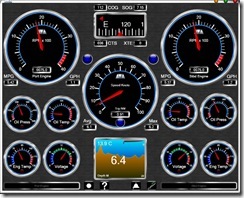 Both these systems are pretty much aimed at the power boat owner – but what about sailors?

Well there is a system that is interesting since it is aimed at Microsoft Windows users – and could be used in either power or sail boat systems and it comes from Fugawi. The Fugawi Avia software receives data from onboard sensors via the industry standard NMEA 0183 and NMEA 2000® protocols, and presents the data as analog and digital instruments on your Windows® PC, netbook or tablet.

If you click on the image and look at the enlargement you will see that each engine is monitored separately on a twin engined power boat. Of course this is instrument data display – it does not provide the logic and the control of the Volvo EVC system.

As I mentioned in my previous post on the virtualisation of instrumentation on boats…the Avia system is actually produced by the Avia Design Group and is part of their range of virtual instrumentation products.

If your are using other software on your laptop you can have the instruments that you want to see overlay the screen so you can watch both at the same time – neat idea.

The title of this post is a bit tongue in cheek of course – if your boat is not drinking 100+ litres of fuel per hour – then a cheaper system than the Volvo EVC may be more up your street. However, if you do have a boat such as the Sealine F42 – then the Volvo EVC is an essential item – and knowing how to use cruise control and auto trim is a good technique to master!