Following on from my previous post on the growing monopoly power in the marine electronics industry and its impact on consumer choice I though I would illustrate my arguments using the excellent new releases from the Furuno/Signet empire.

Firstly, make no mistake the Furuno/Signet empire is going to make a very significant impact on the marine industry, and I think in the short to medium term at least this will be a good thing judging by the quality of their strategic thinking and their product launches so far.

Last year MaxSea launched the brilliant TimeZero software that I reviewed extensively in my 7 part series on Optimal Routing. Now (February 2011) Nobeltec has released its Trident software. Two product launches from two different companies that have loyal and extensive customer bases. You may recall that the Nobeltec customer base was irate and despondent when Nobeltec was sold off by Jeppesen in 2009 to Signet – they thought that was the end – but it was not so. The Furuno-Signet team are smart! Instead of alienating thousands of customers they have wowed them all with two brilliant bits of software….and by doing this by re-using fundamental components much like the big car manufacturers do. This technique means that products can be made with greater standardisation and therefore reliability, be enhanced more easily, and produce greater return on investment thereby attracting increased future investment. 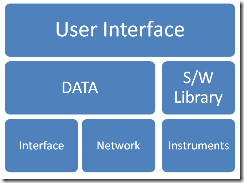 So it looks like the design of a modern chart plotting software systems should look something like this:

At the time of the release of the Nobeltec Trident software in February there were dozens of press releases being repeated all over the blogosphere and marine industry mags that went on and on about this feature and that feature.

Take this quote from Nobeltec PR ”…Trident will be the most dynamic, cutting-edge PC-based navigation software available. Built on the innovative TimeZero chart engine, Trident offers a completely new, sophisticated user interface designed to be extremely intuitive and easy to use. The chart engine redraws charts seamlessly allowing users to easily zoom, pan, change chart display modes, and perform other chart handling functions without limited range presets. Users can choose to pan and zoom the chart to any angle at any range scale instantly. There is no limited "3D mode" because Nobeltec TimeZero Trident operates in a true 3D environment at all times….” etc etc…

I am sure you can all remember the press releases for MaxSea TZ from 2008/9….Doesn’t this sound exactly the same? There is a reason for that.

All the features listed are the exactly the same because they all come from the same library of software functions that the excellent developers at Signet (MaxSea) are responsible for – presumably under the watchful eye of Brice Pryzo.

Only the user interface is different. This should pacify the loyal customer bases of Nobeltec and MaxSea while allowing innovation from the competing development teams at MaxSea and Nobeltec. The user interface can diverge and have different novel ideas added while maintaining a high degree of reliability and maintainability through the use of the same fundamental software libraries. In fact when you install MaxSea TZ on a PC – and I guess the same is true of Nobeltec Trident – you also install a heck of a lot of Microsoft database software and other Microsoft support libraries too – many Gb’s in fact! so make sure you have plenty of disc space. This is the way to make critical software more reliable and yet to allow for developers to innovate with the user interface. This is a great strategy.

Yes I do know that MaxSea has other software on the market at the same time (Navigator; Racing PRO; X7; Commander; Explorer; Professional) and so does Nobeltec (Nobeltec VNS and Nobeltec v12). Well there is plenty of room for all these products and one will suit a particular sailor more than another.

For me it has to be software based on the TimeZero technology however. Having used it extensively last year on sail yacht; power boat; and a 55ft steel coaster sailing from Liverpool to Lowestoft, I do think it is far more friendly, and the ability to instantly switch between vector and raster charts is fantastic.

I am convinced that this is the technology strategy that will win the day ….. it is so reminiscent of Windows v CPM from the 1980’s PC industry – no contest.

Now what I would like to see is Fugawi joining forces – and bringing its X-Traverse and Avia Instrument Interface into the game…now that really would be a basis for some fantastic products!